Einstein was a bright chap and he said that doing the same thing over and over again and expecting a different outcome was the definition of insanity. A thought-how, in today’s commercial world, might Einstein’s comment be assessed?

Many marketers and strategists are, I fear, suffering from the affliction he described.  After all, how many companies do you see with advertising campaigns which are essentially variations on similar themes (nice looking car driven by nice looking person to nice sounding music), offering customers the same promotions as the competition (50% off/75% discount/last day of the sale today) and with products and propositions which are so similar that customers do not really distinguish between different providers?

The above can be perfectly valid strategies.  However, if companies are wanting or expecting consumers to start to behave differently-to buy on something else apart from price or to appeal to previous rejecters of their offering for instance-then they can only hope to succeed if they approach things differently.

Volkswagen’s The Fun Theory applies this concept. They started out with a question-could people be encouraged to behave differently by simply making things fun to do?  In other words, there are many things in life which can be considered a chore, difficult to do or simply not appealing.  We all know that most people can be coerced, in certain situations, to do something they might not really want to.  However, how much better would the solution be if those same people changed their behaviours because they wanted to, because it was actually fun?  It is a hugely simple and powerful premise.

An online campaign and competition tested this hypothesis by inviting people to submit their ideas, some of which were turned into reality.  For instance, the stairs at an underground station were turned into a huge piano so that people “played” notes as they walked up and down-with the effect that they were encouraged to walk instead of taking the escalator.

Or a litter bin in a park with a sound system so that when rubbish was dropped in it sounded like it was falling to the bottom of a well.

Nice viral marketing campaigns, but why did VW do this?  One of their core business problems has been to encourage more people to drive environmentally friendly cars.  Their hypothesis is that people are more likely to do this if it can be made more fun.  Therefore, through The Fun Theory initiative, VW are changing the perspective from which they themselves look at how they serve their customers.

The initiative has resulted in VW has being able to generate different, better types of solutions for their customers in their core business.  For instance, they are prototyping an in car children’s entertainment system which only functions in the back seats when the seatbelts are properly engaged.  Anyone who has been in the situation where their children suddenly decide to take off their seatbelts on a long journey can testify to how this might make for a less stressful experience.  VW would have been unlikely to come up with such a solution without the mindset change allowed by The Fun Theory.

And this is the point.  The Fun Theory means VW are looking at their problems-both old and new-from a different perspective.  They are employing a different way of thinking to get to better solutions for their customers, helping to change entrenched behaviours and create daylight for VW in cluttered spaces.

Einstein would have approved as he was driving his Golf Variant MultiFuel-not because the scientist in him was impressed that the CO2 emissions are 169g/km, but because the person in him thought it might be rather fun.

At Lexden, it is this type of thinking that inspires us since we think you get to better outcomes when you use less conventional approaches.

Lexden is a marketing strategy agency which creates unordinary propositions to motivate customers and deliver commercial advantage for brands.

For more information on how we can help you, contact christopherbrooks@lexdengroup.com or ajairanawat@lexdengroup.com, or call us on T: +44 (0)20 7490 9123. And you can follow us on Twitter @consultingchris.

Each day we are bombarded by thousands of advertising messages. But just how many of them do we actually consume? We decided to collect just one example of a communication every day and explain why it had caught our attention.

The full set are available on flickr (consultingchris), but each month we will showcase our favourite pieces; most engaging communication, most compelling idea and best media placement. Here are November’s offerings for your consideration. 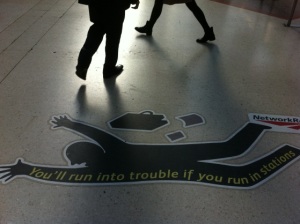 This is a safety ad at Victoria station from Network Rail. I really liked the briefcase and wallet detail which softens the ‘white outline’. Having spent time in Turkey I saw how you make ambient and outdoor work really well. The UK lacks creativity in this space. Or maybe it’s health & safety restrictions! 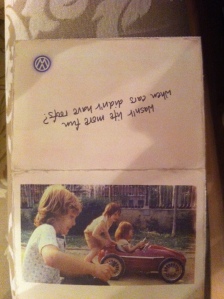 Lovely piece of comms from VW. As a previous owner of 3 different soft tops, it caught my imagination and reminded me of racing around in my Spider and how much I miss it. I’ve got a feeling, thanks to Instagram 1974, we are going to see many 70’s styled shots in ads as well over the next year or so.

This idea came out last year, and I am glad to see it back on the shelves at Boots. I can never quite get over the price barrier of an Innocent smoothie but as these have a charity donation and you get a free egg cosy, why not. They remind me (and I hope I am not alone here) of the Flumps from children’s TV in the 80’s. Great idea and the most unique way I have ever seen for a drink to achieve stand out on the shelf.

Lexden is a marketing strategy agency which creates unordinary propositions which motivate customers and deliver commercial advantage for brands. To discuss how our approach can help you with your burning platforms, contact christopherbrooks@lexdengroup.com or ajairanawat@lexdengroup.com, or call us on T: +44 (0)20 7490 9123, M: +44 (0)7968 316548. And you can follow us on Twitter @consultingchris.

Search our other posts

How to find us